Skip to main content Skip to main navigation
Menu
UBC Sustainability
Home / News / Do It in the Dark: Part 1

UBC students staged an extraordinary exercise in resource conservation in November. Do It in the Dark, the university’s first ever energy-saving contest, grew out of a groundbreaking collaboration between staff and students — but it was the students who made it an overwhelming success.

For three weeks, from November 1 to 19, the number one topic of conversation at Totem Park was Do It in the Dark, a continent-wide competition in which the residence competed with 39 American universities and colleges to see who could conserve the most electricity. In an electrifying — or rather, un-electrifying — final week, UBC went from sixth to second place, just shy of winning the whole competition.

And it all came about because of a small group of concerned students who pushed for meaningful action on climate change.

“During the consultation process for UBC’s Climate Action Plan,” explains M.Sc. student Liz Ferris, “community members mentioned several times that a community engagement campaign should be included. In direct response, a commitment to encourage behaviour change was embedded in the plan,” which the UBC Executive approved in July 2010.

At the same time, the student organization Common Energy was working on “Challenges,” a competition to promote their goal of getting the university beyond carbon neutral. When staff at both the Campus Sustainability (CS) and Student Housing and Conferences offices heard about this, they realized that it dovetailed with the Climate Action Plan, and prompted all three groups to start working together to create Do It in the Dark.

“What I really loved about the process was that it was totally student-led,” says Quinn Runkle, a second-year geography major and director of Challenges. “CS provided the logistics — the hardware and the software — to get the competition going, but it was the students who really made it happen.”

The principal hardware was electricity meters that were installed in each of the six houses in Totem Park. These were linked to specially designed web-based software known as the Building Dashboard, which the students could use to track electricity use in real time during the competition. This unique monitoring software — developed for Campus Conservation Nationals, a US-based group that oversees the whole event — allowed competitors to keep on top of their standings and adopt new energy-saving strategies to further reduce their electricity consumption.

Meanwhile, Common Energy, the Totem Sustainability Committee and the Totem residence advisors got to work. “What this looked like on the ground was the students planning all of the events, making a lot of the materials, helping to define the prizing and incentive system and generally having a lot of creative freedom with the competition,” says Amanda Fetterly, Manager, Communication Design & Marketing at CS.

The organizers planned a series of events to raise awareness and get other students onboard. It started with “Sex With Your Advisor in the Dark” — a teaser event on October 29 at which students handed out glow-in-the dark condoms while encouraging candid discussions about sex — and “Dine in the Dark,” a mass candlelight dinner at which the student organizers tried to talk to every one of Totem’s one thousand odd residents. Near daily events followed, including “Camp Out in the Dark” and “Magic in the Dark,” a show by alumnus conjurer Aaron Martini. 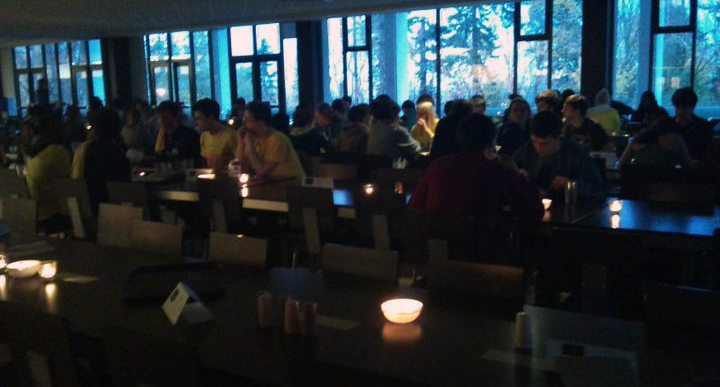 Dine in the Dark at the Totem Park Residence Cafeteria

By the final week, you couldn’t escape the buzz. “The ‘norms’ in Totem Park definitely changed,” says Ferris. “Students were encouraging their peers to take action, and it became socially expected to participate. One of my favourite moments of the competition was asking a student in Totem if he had heard of Do It in the Dark. He looked at me — as if I was dim! — and responded, ‘it’s only the MOST talked about thing in Totem right now!’”

Orion Henderson, Director of CS, says that this is precisely the point of Do It in the Dark. “On a residential campus like ours, we know that buildings account for the vast majority of energy use, water use and total greenhouse gas emissions. While we should upgrade these buildings to run more efficiently, we also have to focus on changing the behaviour of building residents by creating incentives for them to use resources more efficiently.”

“We launched Do It in the Dark at Totem Park because students who are primarily in their first year at UBC live here,” says Kate Ferguson, Assistant Director, Residence Life. “If they learn about energy conservation in their first months at UBC, these students are more likely to keep these enlightened habits in their remaining years on campus. Hopefully they will pass them on to other students, and retain them in later life.”

Quinn Runkle agrees. “People have been taking on all sorts of resource reductions: shorter showers, unplugging vending machines, sharing fridges, hanging their clothes up instead of using the dryer,” she says. “They’re realizing that unplugging your cell phone charger isn’t really a big deal. And there’s no reason not to continue with the good behaviour after the competition’s over.”